The management of elodea in Clark's Creek is an annual project that the City and Pierce County have cooperatively worked together on since 1991. The current management method includes a mechanical cutting operation that is typically completed in July each year to coincide with "fish windows" which are times that the Washington Department of Fish and Wildlife allows work to be done within the creek. This method provides flood control for neighboring properties, and allows for annual maintenance to keep the nuisance, overgrown elodea under control.

In efforts to establish a more sustainable, less intrusive management method, research has been done to explore alternatives to the mechanical cutting operation.

In July 2011, the City, in cooperation with the Puyallup Tribe of Indians, initiated a pilot project to hand pull the nuisance elodea weed from a test section of Clark's Creek. Other cities in Washington have reported success using a hand-pull method to remove and reduce the amount of invasive elodea in their waterways.

By pulling the entire weed, including the roots, a higher removal rate is achieved - versus the cutting method currently used. As the weed is pulled, it is removed from the water, and placed on floating collection platforms near the workers, then hauled out to a dump truck. This method prevents the weed from releasing seeds or breaking apart as it floats down to the collection point - as happens in the current mechanical cutting method.


The 2012 Hand-pull Pilot Project was completed August 1-8, 2012. An update to the 2011-issued HPA (permit) was obtained from WA Department of Fish and Wildlife. The project area included Clark's Creek from the 7th Avenue SW bridge to the 12th Avenue SW bridge.

Equipment procurement and improvements from the 2011 efforts were implemented for the 2012 project, and volunteer recruitment and coordination was completed by the City's project partner, Pierce Conservation District Stream Team. As a result of the significant volunteer force and improved methods, year 2 of the pilot project was very successful. A Task Force, formed in the end of 2012, discussed the problems of excessive elodea and sediment in Clark's Creek. The group determined that diver-assisted suction harvesting (DASH) was the best short-term solution to removing the elodea. The hand-pull pilot project was demonstrating this method to show the effectiveness of removing the entire plant mass versus cutting operations. Read more about the DASH project.

View photos of the 2012 in-steam pilot project work in the Picasa web album. 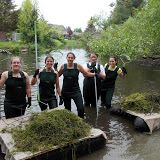 
The 2011 pilot project location was selected as the 605 feet of Clark's Creek beginning at the 7th Avenue SW Bridge, and continuing south into the park. A total of 25 volunteers worked in shifts over 5 days to complete the pilot project. The test section of creek will be monitored over the next year to determine the effective removal rate, and rate of re-growth.

It is anticipated the success of the pilot project will lead to an expansion of the hand-pulling efforts over larger sections of the creek in upcoming years, with a potential to expand hand pulling of the elodea along the full length of the weed cutting project area.
View select photos from the 2011 in-steam work in the Picasa web album. 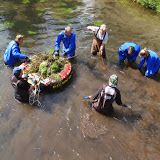