The City is reimagining one of its downtown properties, which has been undeveloped for many years. Dubbed the Cornforth-Campbell Lot, this 1.5-acre parcel located at 115 2nd ST SE, is comprised of three separate properties, the Cornforth Campbell Lot, the Hill Lot, and a covered parking lot. The City currently owns these properties and is seeking a talented developer to implement a concept that will revitalize that area of downtown, build quality housing, preserve parking, and create synergy with other planned City projects, most notably the Meeker Festival Street Project.

Meeker Street, located next to the Cornforth-Campbell parcel, currently hosts a range of public events, including the annual Meeker Days Festival. The recently completed Meridian and Downtown Streetscape Improvement Project determined that Meeker should be Downtown’s primary “festival street.” In 2023, staff will work with a consultant to create a Festival Street concept. That project combined with the Cornforth-Campbell redevelopment will help accomplish the City Council's goal of a vibrant, healthy downtown.

The City is seeking an experienced and creative development team to build a combination of housing and commercial space that could exist on this parcel. Development teams, who are interested in submitting their qualifications and a high-level proposal for the Cornforth-Campbell properties should download the Request for Proposals here. Submittals are due on March 9, 2023, at 4 pm. A Site Tour and open house will be held on Thursday, February 2, 2023, at 1:30 pm at the site (115 2nd St SE in Puyallup). Developers, who are interested in submitting a proposal, are encouraged to attend this Site Tour. Attendance at the Site Tour is optional and not a requirement of RFP submission.

This web page contains information about the project, its background and why we are doing it, how you can get involved, and other pertinent items. Please check back here for updates.

Like much of Downtown Puyallup, the Cornforth Campbell Lot has a rich history. The oldest structure on the site was built in 1941 by H.O. Wilen and housed H.O. Motors. The original building contained a car dealership retail store and a service garage. It was there that a young Evan Cornforth worked as a parts manager for Wilen, eventually moving up the ranks to partner in 1961. The business was renamed Wilen-Cornforth Motors in 1965.

On the north side of the property was another auto dealership called Gifford Motors. On the second floor of this early 20th-century building was the popular Puyallup Roller Rink, owned and operated by brothers Curly and Shorty Campbell. This building tragically burned down in 1964. The empty lot was acquired by Wilen-Cornforth Motors, which was to be used as a parking lot to display their used vehicles. Then, in 1994, Wilen-Cornforth Motors changed to Cornforth-Campbell Motors. Although the car dealership closed in the 2000s, the name Cornforth-Campbell, and the enduring legacies of the men who gave their names to the sites, have lived on in Puyallup’s local lore.

In 2002, the City purchased the property and used it primarily for public parking. In 2022, the City Council and staff worked with a consultant to re-look at the property and its potential to reinvigorate the surrounding area of downtown. Development concepts were created to be illustrative of the City’s vision and intent for these properties to represent the type of development that might be appropriate, not to create precise specifications that developers must follow. Staff has incorporated these concepts into an RFP for prospective developers, which was released in January 2023.

Where is the Cornforth Campbell Lot?

The property is located at 115 2nd St SE in downtown Puyallup. See the below map, which details how the parcel is divided up. 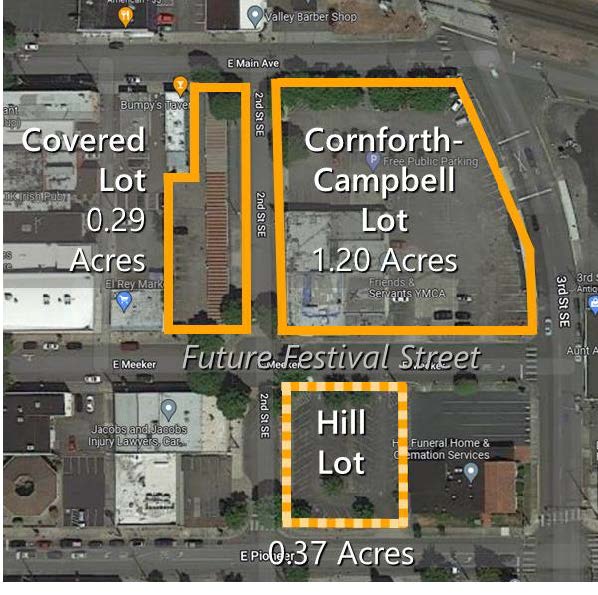 Why is it called Cornforth Campbell?

The name comes from the two businessmen who operated car dealerships on those properties in days gone by. Evan Cornforth and brothers Curly and Shorty Campbell owned two separate businesses on the property in the 60s. The two car dealership businesses merged to become Cornforth-Campbell Motors in 1994. The business was sold in the 2000s and moved from the property. The property is affectionately named to honor the people who developed it.

Why is the City selling the property?

The City is selling the property to encourage more economic development and reinvigorate that region of downtown. Currently, the properties are underutilized, and the City Council has instructed staff to find a developer that can bring out its full potential. This is in alignment with the City’s vision of creating a vibrant downtown, which is outlined in our Downtown Economic Development Plan.

When is this happening?

The City has released an RFP and plans to select a development team by Spring 2023. By the end of 2023, the City hopes to be under contract with the selected firm to sell the property. From that point forward, we will update this webpage with project timelines so the public can be aware of the progress. Please check back here under the Project Timeline section for updates.

I park my car at that lot. Where will I be able to park my car once this lot is developed?

Currently, the City owns a public parking lot to the south of the Cornforth-Campbell lot called the “Hill Lot.” The lot contains 41 parking spaces, which are utilized by downtown business employees. City Council, during their development concept discussions, indicated that they would like to preserve this lot for public parking.

In addition to preserving the Hill lot for public parking, the City is working on creating other opportunities downtown to address parking needs throughout the business district. This includes identifying underutilized lots, constructing new lots, and creating shared parking agreements with private lot owners.

Once selected, the City will work with the developer to create some additional onsite shared parking options within the project scope.

How many units of housing are going to be created by this?

The City wants to create quality living downtown that is also affordable and attainable. In the RFP, the City specifies a preference for market-rate apartments or townhomes that are affordable for middle-income families. Condominiums would also be considered, but only if the developer can secure financing. At this early stage, it is difficult to determine how many units of housing will be created. Each design concept (Concept Options C, D, and E) calls for a different combination of townhomes and apartment units based on their configurations. Please see the Conceptual Design Options section, which shows the different housing configurations that could be applied to the properties.

It says in the RFP that the City would like to see a “Market Hall,” “Micro-Retail,” or other highly active commercial space concept integrated into the development. What are those?

A Market Hall is a space where multiple micro-restaurants sell their goods to customers. Market halls often include a dining area that is shared between the vendors, and there may be other types of vendors including those selling prepared and fresh foods, and other small non-food vendors and businesses. Generally, market halls are similar to Public Markets but smaller. One example is Pybus Market in Wenatchee. The design concepts for the Cornforth-Campbell sites show a potential for a 6,000-square-foot market hall.

Micro-retail means small commercial spaces for small local businesses. Spaces can be as small as 100 square feet or as large as several thousand square feet. Some of the benefits of micro-retail are providing spaces that are affordable to small, local businesses; and creating a lot of activity and interest along the public sidewalk by creating spaces for multiple vendors. An example of micro-retail is the Pop Shops in Bothell, Washington.

As we move forward in the process, we’ll be engaging with residents and business owners, especially downtown, who may be impacted by this project. Please check back here for public outreach opportunities.

The following Conceptual Designs were selected by City Council as potential options for the Cornforth-Campbell site.

Design Concept A – This concept calls for market-rate housing units (apartments or condos) with parking in the interior of the Cornforth-Campbell site. It also includes a market and retail space located along Meeker Street, which would use the current H.O. Wilen Motors building as a renovated space. Townhomes would be located across 2nd Street on the Covered Lot (Lot B). With this configuration, there would be approximately 92 housing units in the main building and 10 townhomes. 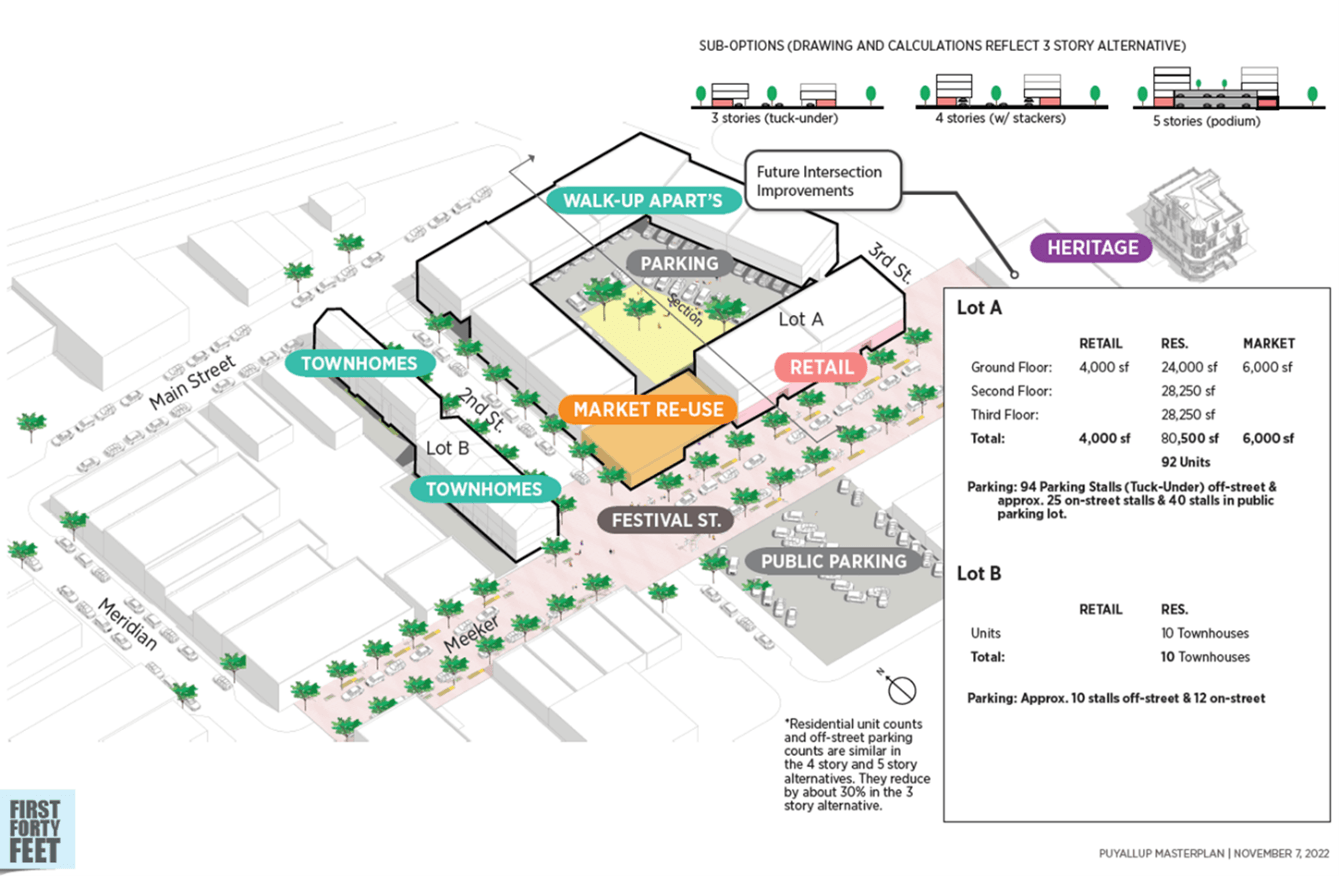 Like Concept A, Concept B includes 10 townhomes on the Covered Lot. 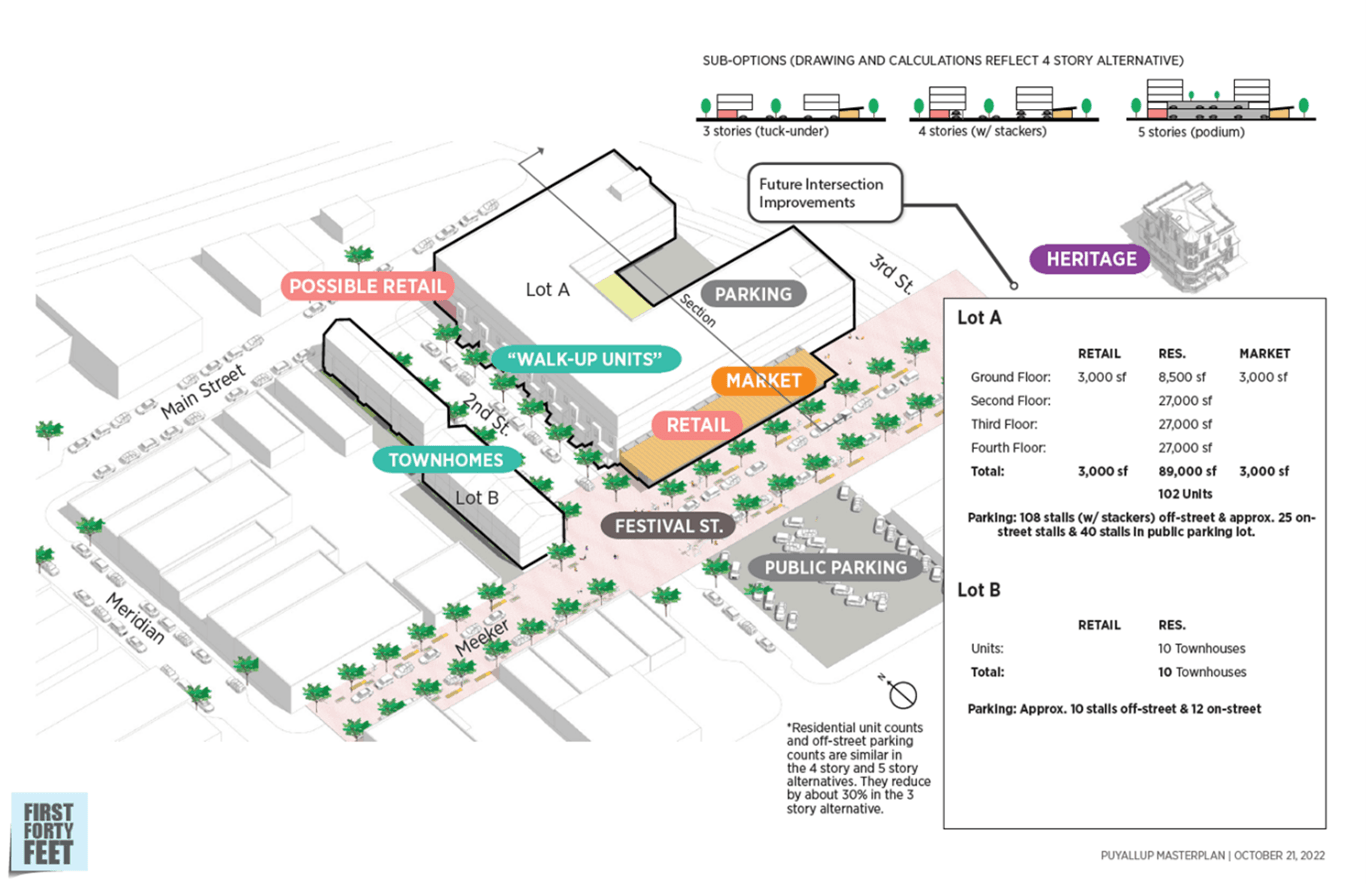 Design Concept C - This concept places two-to three-story townhomes on the Cornforth-Campbell Lot rather than the mixed-use building shown in Option B. Based on the consultant’s analysis, townhomes are a type of housing that is in demand Downtown. This configuration shows approximately 48 townhomes on the Cornforth-Campbell Lot, with another 10 on the Covered Lot. In this option, the existing H.O. Wilen Motors building would be renovated to accommodate a Market Hall. 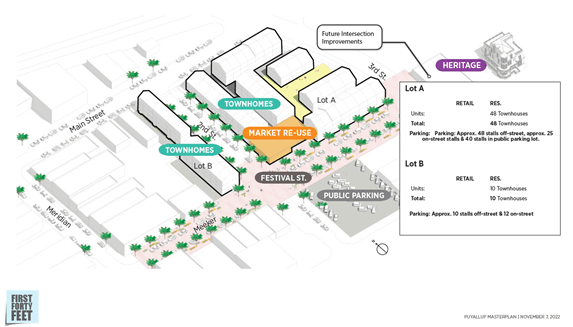 For developers, who have questions about the RFP and the opportunity, please contact:

For residents, who have general questions about the project, please contact: