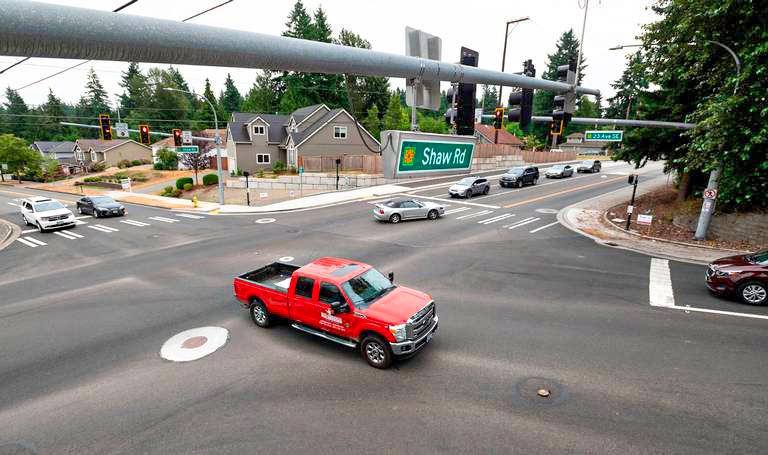 The City of Puyallup is conducting a Corridor Study to identify needed improvements for the segment of Shaw Road between 12th Avenue SE and 23rd Avenue SE. These improvements will ease traffic congestion, make it easier to access side streets, and provide pedestrian and bicycle facilities.

Future project efforts will include development of design drawings of the preliminary design concept, a conceptual stormwater design, land surveying, utility coordination, Deer Creek realignment and culvert replacement, preliminary environmental design and permitting requirements, a preliminary geotechnical investigation, and a preliminary project funding estimate. The design drawings will allow the City to apply for grants and share with potential funding partners, such as Pierce County, to secure construction funding.

In 2018 and 2019, the City constructed improvements to the adjacent segment of Shaw Road, between 23rd Avenue SE and Manorwood Drive. These improvements included adding a continuous left-turn lane, crosswalks, sidewalks, a shared-use path for biking and walking, and replacement of a sewer line. The project cost $7 million to complete and the City received grant funding from WSDOT, which covered most of the project cost.

As a continuation of that work, the City applied for additional WSDOT grant funds in 2020 to begin studying improvement opportunities for the next phase of Shaw Road between 12th Avenue SE and 23rd Avenue SE. The City was successful in securing a $614,000 grant from the Puget Sound Regional Council (PSRC) to conduct this corridor study and prepare preliminary design drawings.

In December 2020, the Draft Traffic Analysis findings were shared with City Council. The analysis looked at potential lane widening options and concluded that by 2040, Shaw Road will be graded “F” on the City’s level of service grading scale, which uses between “A” and “F” to represent the amount of traffic congestion. To review the Traffic Analysis, please go to the Documents section of this page.

Why is the City studying Shaw Road and what are the proposed improvements?

The segment of Shaw Road between 12th Avenue SE and 23rd Avenue SE is primarily a 2-lane roadway without sidewalks or bicycle facilities. During peak travel times it can be difficult to turn into and out of side streets, and during the afternoon commute, southbound traffic experiences congestion, particularly approaching the signal at 23rd Avenue SE.

This project will widen Shaw Road to add vehicle lanes to improve traffic flow, including a continuous center turn lane to enhance safety and access to side streets. The project will add sidewalk along the west side of the street and a shared use path along the east side of the street that will match the previous phase of Shaw Road improvements that were constructed in 2019, between 23rd Avenue SE and Manorwood Drive. These non-motorized improvements will connect neighborhoods, schools, parks, trails, and other nearby destinations. As part of the project, Deer Creek culverts will be improved for fish habitat, retaining walls will be constructed, and corridor utilities and street lighting will be upgraded.

Where would these improvements happen?

Most of the improvements to Shaw Road will be constructed between 12th Avenue SE and 23rd Avenue SE. Improvements will include two southbound lanes through the 23rd Avenue SE intersection that will merge into a single lane at approximately 24th Avenue Court SE. The project will construct a shared use path along the east side of the street that will extend north to E Pioneer and the Foothills Trail and south to connect to the existing Shaw Road Trail at 23rd Avenue SE.

I drive on Shaw Road frequently. How will this impact me?

During construction, there may be temporary partial or full road closures of Shaw Road. Messaging signs and detour routes will be established, and residents will be notified of upcoming construction activities.

Once completed, the project will improve safety, vehicle travel times, and access to side streets.

Will widening for project improvements impact properties along Shaw Road?

Some segments of Shaw Road will be able to fit the improvements within the existing right of way, and other segments may require acquisition of additional right of way width along Shaw Road.

How will the project be paid for?

The project is currently only funded as a planning study to identify corridor improvements. Funding for construction is expected to come from a variety of sources including grants, funds through the state legislature, impact fees and mitigation from new development, and City of Puyallup revenue.

What are the next steps and when is the City making these improvements?

Who can I send comments to?

The first Open House was held on December 9, 2021 via Zoom and on the City's Facebook page. To watch the Open House, please go to www.Facebook.com/PuyallupCity. You can also watch the video below.

The second Open House will be held in 2022. At this time, a date is still being determined. Please check back here for more information.

The public can also ask questions or provide comments via the online Comment Form. Please fill out the form and submit it below.

For questions about this project, please contact Scott Tkach at stkach@puyallupwa.gov.