The Land of the Generous People


The story of the Puyallup Valley started with its geological formation far back in the mists of eons past. Its development is told in the story of pioneers who settled it, cleared the land and built its small cities in the last half of the 19th century.


In the early 1830s, the first European settler of the Puyallup region, Dr. Tolmie (in the company of an Indian guide and several other natives) passed through what he called in his journal the "Poyallipa" valley. The indigenous people who lived here for thousands of years numbered about 2,000 and were closely related to the more populous race of Indians living in the Nisqually River valley. 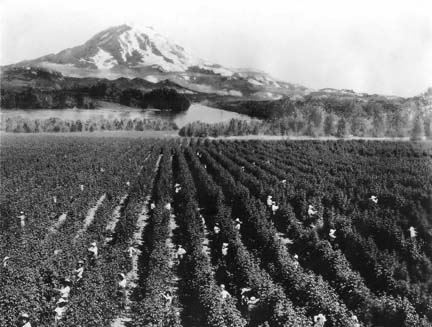 It was their hospitable spirit that gave this tribe the name "Puyallup" which translates to "generous people." The Puyallup Indians had permanent dwelling places along the bank of the broad and meandering Puyallup River, which was choked with massive log jams and prone to frequent floods. The valley floor was a maze of creeks, old growth forest and exotic ferns.

Formation of a City


Puyallup is a scenic place that emerged among hops, succulent berries, and the beautiful flowers of the local bulb farmers. Pioneer hop king and champion of the Oregon Trail, Ezra Meeker, planned the city in 1877, giving it and the river flowing through the fertile valley its unique name. The City of Puyallup was incorporated in 1890, and Meeker served as its first mayor. The livelihood for many local residents during the early years was primarily agriculture.


Ezra Meeker's Homestead - The Meeker Mansion, at 321 East Pioneer, is well worth a visit. The Mansion was once home to Puyallup's founder and first mayor, Ezra Meeker. Many of the original furnishings are on display and the home is on the National Historic Register. The mansion is owned and operated by the Puyallup Historical Society, and open for tours.


The City of Puyallup, Pierce County and the Washington State Department of Archaeology and Historic Preservation commissioned The Puyallup Historic Survey Report - Puyallup, Washington (PDF) in August of 2007. The report was written and compiled by BOLA Architecture + Planning of Seattle. The report contains a wealth of information on the history of Puyallup, particularly its historic architecture.