In 2017, City Council re-initiated work on the Downtown Planned Action Ordinance (PAO) that had been paused in 2012 (see below for the project background). In July of 2018, the Council adopted the Downtown PAO and related code amendments. Projects that qualify as a planned action can use the City’s completed environmental analysis under the State Environmental Policy Act (SEPA), and therefore, are not subject to any additional mitigation, noticing, or appeals under SEPA, except as provided in the PAO. The map below indicates the boundary of Downtown planned action area, within which eligible projects must be located.

Under SEPA, a planned action ordinance is a way to have environmental review of a specific geographic area completed prior to any permits being filed. Projects that qualify as a planned action may use a streamlined permitting process. A project being designated a planned action is voluntary and can provide predictability and time-savings for projects, because planned actions do not require additional processing under SEPA. This reduces time and costs for projects looking to locate in the area.

In 2011, the City undertook a project to bring together a “transfer of development rights” (TDR) program with an update to the Puyallup Downtown Plan, the preparation of a Planned Action Environmental Impact Statement (EIS) and a Planned Action implementing ordinance. The City completed a number of steps in that process including holding a scoping meeting, analyzing the potential issues identified, issuing a Draft EIS in April, 2012, and receiving comments. As City staff and project consultants were preparing the response to those comments and the Final EIS, the City Council chose to terminate the project, largely due to concerns related to the TDR program component of the project.

In early-2017, City Council re-initiated the Downtown Planned Action project, with the direction to pick up only the Planned Action/EIS component where it was left off in 2012. Any work on development of a TDR program could occur under further direction at a later date. The City then rehired the consultant team working on the original Planned Action and over the summer and fall of 2017 have been working to update the analysis and proposed mitigation. At this time the bulk of that work has been completed and we are preparing to issue an addendum to the prior document. This will include a comment period followed by preparation and issuance of a Final EIS. The Planning Commission will hold a public hearing and make a recommendation of a preferred alternative, which will include code and comprehensive plan amendments in order to fully implement. It is anticipated that the City Council will be presented with this recommendation in the spring of 2018.

The advantage of the Planned Action process is an increase in certainty and predictability, and a decrease in processing time, resulting in real cost savings for applicants. The advantage for the City and citizens is improved economic development and implementation of adopted plans.

Planned Actions do not change the City’s plans. Only the City can do that through the regular planning process. Planned Actions are intended to expedite development proposals that:

Where planned actions exist, they can provide a significant economic development incentive.

The planned action ordinance brings the environmental analysis and mitigation measures within the EIS together with the City’s plans and development regulations, providing the basis for expedited review of development proposals. Cultivating Puyallup will bring these measures to the City, and ultimately it is the City Council who will have the final authority to adopt, amend or choose not to implement the planned action process for Puyallup.

The Downtown Planned Action considers tools that promote economic development and downtown revitalization by implementing a "Planned Action" Environmental Impact Statement (PAEIS or EIS). The PAEIS will expedite the processing or projects that are consistent with the City's adopted plans for Downtown. The proposal also includes amendments to the City's Comprehensive Plan, including the Transportation Element, and Capital Facilities Plan, and the municipal Code. Municipal Code amendments would change development standards governing the size and scale of buildings and forms of parking that would result in greater building density and intensity, and a greater amount of population and employment.

The Proposed Action(s) are:

This SEPA EIS is intended to address the potential for significant adverse environmental impacts that could occur as a result of approval of the comprehensive plan and development regulation amendments associated with the Downtown Puyallup Planned Action, as well as impacts from potential future development activities over the approximately 20-year buildout horizon (2035 per Comprehensive Plan). The EIS is intended to provide decision makers with relevant information needed to consider the range of Proposed Action(s) and their probable, significant adverse environmental impacts. The City is proposing that future development within the Downtown Puyallup EIS study area be designated by the City of Puyallup as a Planned Action, pursuant to SEPA (WAC 197-11-168). 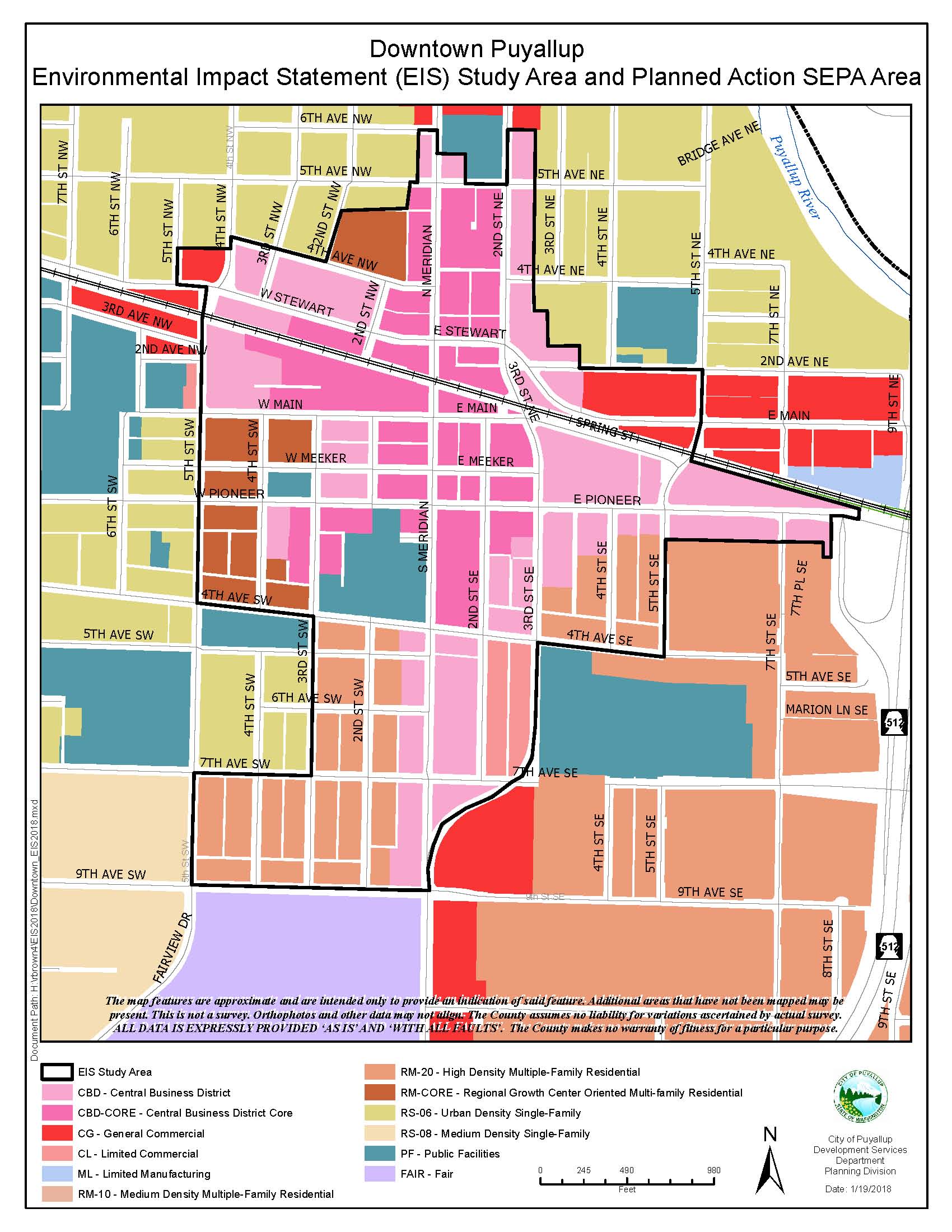