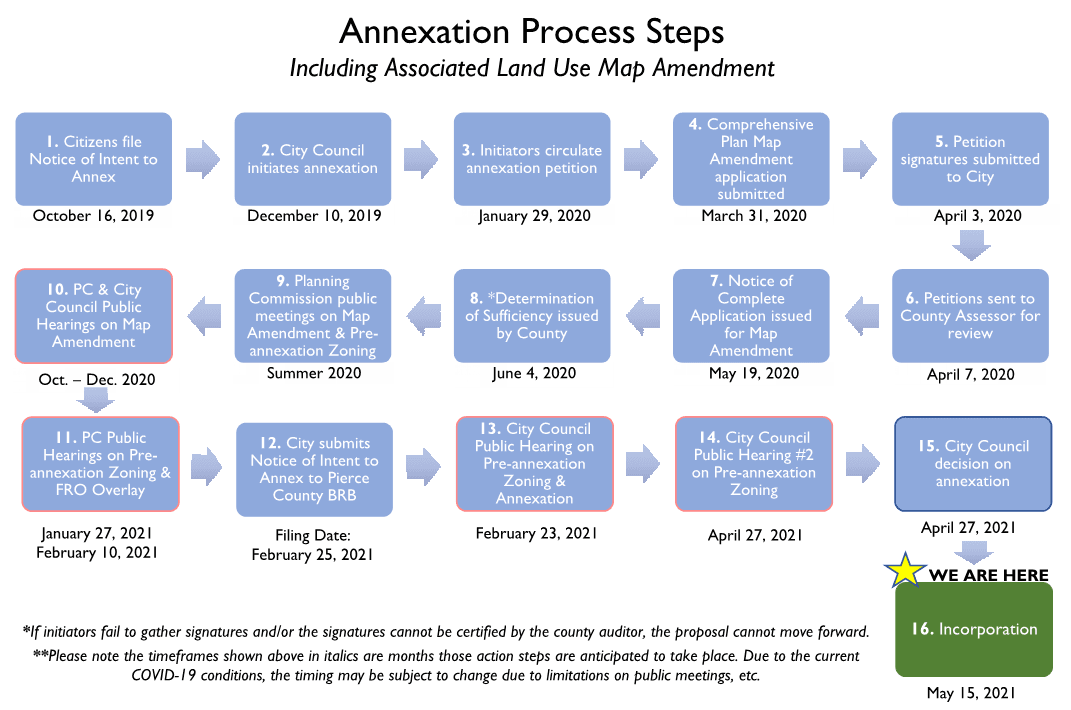 The "Freeman Road" area is an area within the City of Puyallup’s Urban Growth Area (UGA), comprising 134 acres, bound by Valley Avenue NW, Freeman Road and N. Levee Road. It is an island of unincorporated land, surrounded by Puyallup, Fife and Edgewood.

On October 16, 2019, the City received a notice of intention to commence annexation proceedings from a landowner within the Freeman Road annexation area. That submitted notice provides signatures of property owners representing more than 10% of the total assessed value of the proposed annexation area, which is the requisite first step in initiating an annexation process under the direct petition method.

Puyallup City Council met with the annexation petitioner during their meeting on Tuesday, December 10th, and passed a resolution accepting the proposed annexation area, requiring simultaneous adoption of zoning regulations and an assumption of city indebtedness.

Three public hearings have been held associated with the Freeman Road Annexation. There is another upcoming meeting and a public hearing related to the annexation. Please see below for hearing dates and a short description. Additional information on what was considered at each public hearing and how to participate can be found on the public hearing webpages linked below.

As part of the 2020 Comp. Plan Amendment cycle, the City of Puyallup received an application requesting to change the Land Use map designation of eleven (11) tax parcels, totaling approximately 14.59 acres in size, located within the potential annexation area. On December 8, 2020, Puyallup City Council approved the application, including the redesignation of four additional parcels, to the requested Light Industrial/Warehousing (LM/W) land use designation. For information on this associated application, please visit the 2020 Comp. Plan Amendments webpage; the application number is L-20-0001.

If you have any questions about the annexation process or would like to provide comments or input on this annexation, please contact Kendall Wals, Associate Planner at (253) 841-5462 or Email.